Rev Canon Gregory Mario Verissimo was ordained on the 13th of July 2002 in Nigeria by The Most Rev Albert Fasina of Ijebu-Ode Diocese, Nigeria. He first studied in Sacred Heart Seminary, Port Harcourt, Rivers State, Nigeria, where he had the initial formation in preparation for the Catholic priesthood. He completed his secondary education at Sacred Heart Seminary in 1991 and was admitted into Saints Peter and Paul Major Seminary, Bodija, Ibadan, Oyo State, Nigeria. Here he studied philosophy and theology and earned a Bachelor’s Degree in philosophy from the University of Ibadan and a Bachelor’s Degree in Theology from the Pontifical Urban University, Rome. He has worked in parishes in Nigeria as well as in the Formation House of the Josephites (Society of St Joseph the Worker) in Nigeria. He joined the archdiocese of Southwark in 2008 as a Fide Donum priest and worked in the parish of St John the Baptist Purley. From here he went to Belgium to study Canon Law. He has recently incardinated into the archdiocese of Southwark and was appointed Parish Priest of English Martyrs in September 2017. 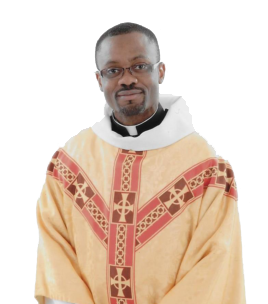